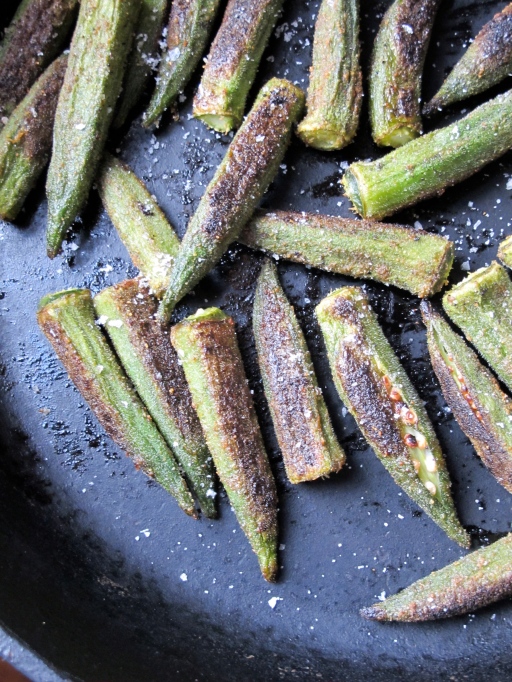 After writing the last post about okra, I planned to quickly post the follow-up recipe posts, but when I went in search of okra for some last-minute testing and photos, I couldn’t find any! The bin at the local supermarket here was full of the sorriest most pathetic pile of okra I have ever seen (due less to being picked over by discerning shoppers than to the general attitude of apathy and torpor under which that particular produce department seems to generally operate) and the farmers market was a wash over the weekend. I guess the stand that carries the beautiful okra I posted last week is only there on weekdays. Oh the trials of trying to cook Southern food in NYC! As a New Orleans transplant I was chatting with said, “You can get anything in the WORLD here, just not anything in the COUNTRY.” 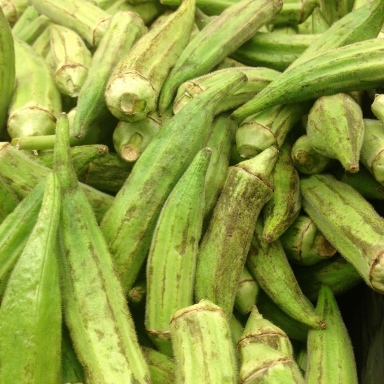 This has to be the simplest way to cook okra. Whole, with a lightly crisped spicy exterior, roasted okra is easy to throw together as part of a meal or as I like it as a tasty salty snack. It’s a perfect little finger food to have with beer, salty and spicy without the oily heaviness of a bowl of chips.

I have tried a few different methods of making roasted okra:  slicing it into quarters and tossing it with slivered chiles and onions, tossing whole pods with spices, corn flour and corn starch, tossing whole pods with oil, corn starch and spices, low heat, high heat, you name it. Trial and error brought me to conclude that the simplest, most predictably successful method was to toss whole trimmed pods with oil, then lightly coat them with a cornstarch and spice mixture and then roast them at high heat on a large baking sheet.

Before I detail the recipe I use here, I’ll explain a couple of the problems I’ve had with other methods.  First, quartering the okra and roasting them with chiles and onions is tasty, but it’s not as crisp as the whole roasted pods and at high heat (to try to crisp them up) the chiles and onions tend to burn before the okra is done. Second, adding corn flour (which I use when I fry okra) adds a little extra crispness to the exterior, but the spice coating tends to be clumpy and not adhere as well. Third, my trigger-happy smoke detector taught me to always coat the okra with oil BEFORE putting it on the baking sheet! I tried drizzling the okra with oil while it was on the pan once and the oil that was on the pan started burning and smoking, the smoke detector was shrieking and I was standing in the hall frantically waving a plastic cutting board at the ceiling to get it to shut up! Finally, low heat doesn’t brown the exterior quickly enough, so by the time the exterior has crisped up, the entire pod has collapsed into mush.

One of my favorite spice blends for roasting okra is a vaguely Indian mixture with cumin, ginger, and chile, but I say try whatever seasoning suits your fancy, as long as the spices are finely powdered so that they will stick to the okra – in other words, no big flakes of oregano leaves or rosemary. They will just fall off and burn. I have also used coconut oil instead of regular vegetable oil which compliments the curry-esque spice mix. 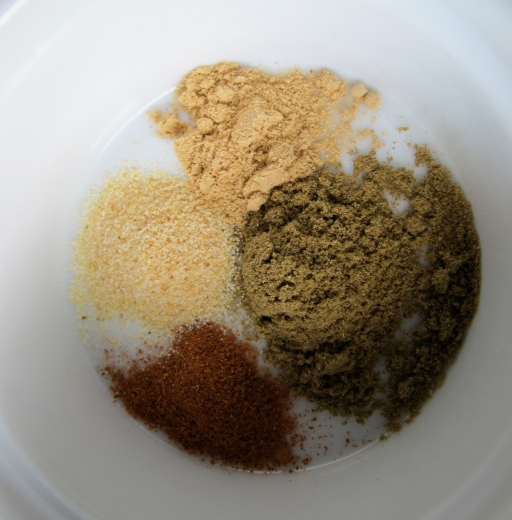 1-2 tablespoons of oil (coconut if you have it)

Trim the stems of the okra down to within ¼ to 1/8 inch of the top of the pod. Wash and drain thoroughly in a colander, shaking off as much moisture as you can.

In a small bowl, thoroughly mix the spices and cornstarch so that the coating on the okra will be even.

Scatter the okra onto a large baking sheet, giving the okra as much elbow room as you can. The browning happens where the okra is touching the pan and NOT touching its neighbor which would cause it to steam and not roast.

Place the pan in the oven and cook for 12 to 15 minutes (or until the okra is browned to your liking – I think my oven may be a bit fiercer than some others). Give the pan an occasional shake to turn the okra, giving each side time on the pan’s hot surface.

Remove from the oven and allow to cool slightly before checking for salt and devouring.

My mother, quoting her mother told me my whole childhood; “it doesn’t matter if you’re rich or poor, if you have good manners you can go anywhere.” She was kind of a stickler about it, making us sit on our left hand if we were poking in our food too much, telling us not to lean over our plates like a puppy at a bowl. I even remember her making me stand up for the last part of a meal because I had tipped my chair one too many times. The caveat was that no matter what, making other people comfortable is the soul of good manners. So when I found myself at a table where the hosts used their hands to eat, I washed up, watched for technique, and dug in.

We were guests in the home of a colleague, a family from Calcutta who live in Hong Kong. Along with my husband, a Chinese colleague, another visitor from India and our host, I was the only woman seated for the meal. The lady of the house, her daughter and a house helper bustled around serving food onto our plates, filling glasses with drinks, bringing new plates and bowls and fussing over all of us.  The table was covered with chapattis, a curry made with chickpeas, a saag paneer or spinach with paneer cheese, a spicy shrimp dish that was redolent of mustard seeds, fried fish served with a spicy mustard, a mutton curry with a cinnamon, cumin and rosewater scented biriyani, cucumber raita, hot mango pickles, and a fruit chutney with dates and mangoes. “Using a fork to eat is like talking to your fiancé through an interpreter,” they told us.

Chapattis are a flat round bread that is used sort of like a spoon to scoop saucier foods into your mouth. It is flaky, a little crispy and chewy .The fish and shrimp were all peeled, dipped in sauce and eaten with the right hand, the left hand not being used to touch the food, only to serve yourself with the serving spoon. The biriyani and mutton curry were mixed together by hand on the plate and when it was sticky enough to hold the rice together but not saucy enough to drip, you pick up a clump on your four fingers, bring it to your mouth and flick it in with the thumb. I did my best to keep myself food free above the wrist, and by leaning over the plate, only dropped a little into my lap.

It was a delicious meal characteristically full of complex flavors and the taste was enhanced by the uniqueness of the experience. I think my mother or grandmother would have been proud of my eating with my hands. Showing respect, trying to adapt, and eating whatever is put before me with thanks is what they taught me and that is what has allowed me to go anywhere. 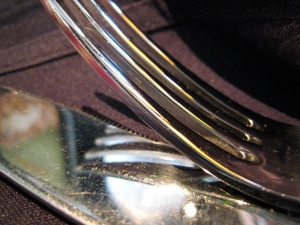 Have you ever seen one of those cars in a salvage yard that has been crushed into a little cube? Chungking Mansion is like a city that has been sent through the compacter and is now a condensed version of an entire city, but fits on one block of Nathan Road in Tsim Sha Tsui.  An anthill of activity, it’s labyrinth of hallways houses 4,000 people and hundreds of shops, guest houses, import companies, restaurants and food stalls and everyone is there to hustle. 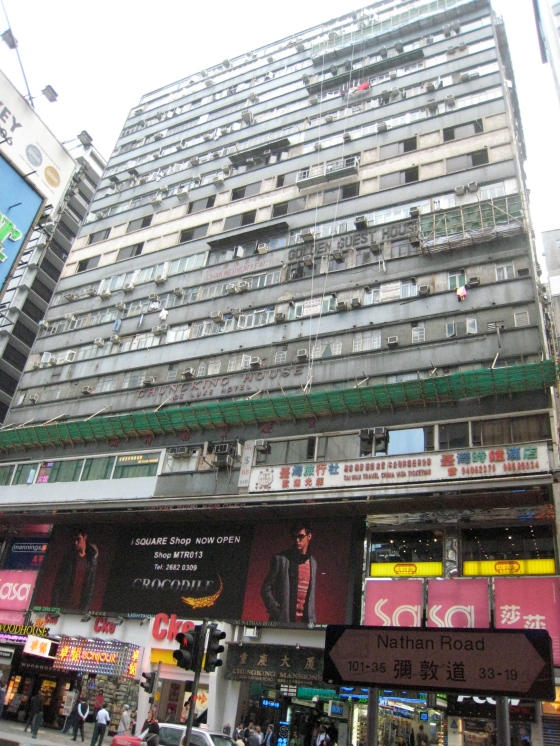 This is where we had supper last night. Third floor, block C , in the (unmarked) Delhi Club. I had read about it on openrice.com and was in the mood for adventure. Walking in felt like walking into someone’s basement that had been decorated with cheap tile and glass Christmas balls, but the smell! We sat and ordered a couple of Kingfishers and looked through the menu. One of the waiters came and asked if we knew how to order and I said no because I like to see how he would guide us. “Spicy or mild?” he said, “spicy”I replied and we were off on a series of questions like mutton vs chicken, masala vs vindaloo, plain vs garlic naan, meat vs veg samosas. Another waiter dropped off a couple of crisp fresh papadam which we smeared with cilantro- mint chutney. The chutney was fresh, cool and spicy at the same time. Veg samosas were next, very hot with the flakiest shell and an intensely spiced interior. My tongue had started to heat up to the point where all of my taste buds are paying attention to what comes next, my favorite heat level. We shared a mutton vindaloo with garlic naan. The vindaloo was intense- sweet, sinus clearing hot, and rich with chewy mutton and potatoes. We used the flaky naan to wipe up the sauce into our happy mouths. We finished with cardamom scented masala tea, a milk tea made with black tea steeped with a spice blend that is both exotic and soothing.

When we left, winding our way back down and out, it struck me that our meal had a similar vibe to the Mansion- intense and hot, a complex blend of flavors, spices, and textures, a little overwhelming, but deeply satisfying and completely unforgettable.