Whenever I visit Atlanta, my family tries to have at least one family meal together, gathering at one of my sister’s or my parent’s home to spend the afternoon cooking, playing with the little ones, and finally eating together. My family is big and there are often a couple of friends with us too so Sunday lunch is usually 12+ people. We’re all adventurous eaters and all love vegetables so I like to try to introduce a new vegetable or new way of preparing them whenever I’m there. I doubt anyone would be surprised that when I’m in town, I become the de facto executive chef for the family meal but my siblings make excellent sous chefs. My youngest sister Michal made these braised radishes with me last time and they were such a hit I decided to post the very simple preparation here.

When we had a garden, I always planted radishes because a. they were almost instant garden gratification, b. they were so pretty, and c. radishes are especially nice when they are still young and tender. Leaving them in the ground for a couple too many days and they can get really hot and fibrous. Growing them, you get them at their brightest, crispest, and sweetest. But I alway grew more than I wanted to eat raw so I started cooking them this way, with just a little liquid so that their flavor still shone through, just cooked through but not too soft and mushy. They have a flavor somewhat like a sweet young turnip; in fact, if you find the tiny tender white ping-pong ball sized turnips with the greens still attached, they are also delicious cooked this way. I’ve actually mixed radishes and turnips in the picture below. 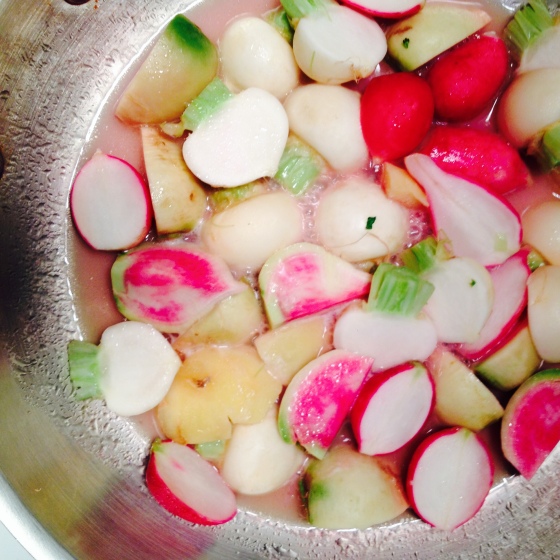 Wash the radishes thoroughly, remove the greens if they are still attached and trim the root and stem ends. Cut the radishes in half if they are large or leave them whole if they are around marble sized. Place in a frying pan with a fitted lid that is large enough to hold all of the radishes in a single layer. Add the butter, soy sauce, and ginger just a bit of water, maybe a tablespoon. Turn the heat on low and put a lid on the pan. Shake the pan occasionally to roll the radishes in the pan. After about 5 minutes, check to see if the liquid is simmering. The salt in the soy sauce and heat of the pan should cause the radishes to release quite a bit of liquid but if the pan is still a bit dry, add another tablespoon or so of water. Replace the lid and cook for another 10 minutes or so. The radishes should give no resistance when pierced with the point of paring knife but should still be firm when they are done. Remove the lid and raise the heat to reduce the liquid to a sticky glaze. Remove the ginger knob and serve warm.

Today has been one of those filthy days we’ve been having so much of this winter  which, frankly, I’m sick of. Intermittent rain showers, spurts of hail mixed with tentative peaks of watery sunshine until the afternoon deteriorated into a somber steady rain.  Only an emergency could have roused me out of my house. I finished a book, did some light tidying, and pruned my unread emails, but as the day got grimmer, I began to feel that depressed lassitude that prolonged lack of sunlight causes. Then I remembered the homely smell of fresh-from-the-oven bread that had greeted me when I walked into a friend’s house yesterday and knew immediately what I should to try to do- bake yeast rolls to go with my lentil soup for supper.

Having a mother that baked bread while I was a child had given me the sort of nebulous “muscle memory” of bread making- the foamy awakening of live yeast, the strands of gluten that form as dough is kneaded, the texture of properly kneaded dough, the satiny sheen on the outside of a taut ball of dough set to rise, and the thump on the crust and smell to announce a “done” loaf.   But knowing what to look for is different from knowing how to get there and my independent attempts at baking with yeast have had mixed results. My pizza dough is well in hand, and oddly, a complex hearth loaf involving a two-day dough fermentation and a “poolish” has always been successful. But regular sandwich loaves have usually been damp and heavy and all of my attempts to make my favorite eggy challah bread have been horrible with none of challah’s characteristic pull-apart strands.  So unlike other types of cooking with which I feel a strong degree of confidence, I always approach bread baking with trepidation.

Looking through my cookbooks, I found a recipe that required a two-day rise in the refrigerator, one that needed powdered milk and potato flakes, and another that made about forty rolls. I’ve heard eternity described as “two people and a ham” and I think that “two people and forty rolls” could come pretty close.  I’ve had good and consistent results with Southern Living cookbooks and used their basic roll recipe divided in half.

Ingredients ( I halved these measurements)

Combine 3 cups of the flour, the sugar, salt and yeast in a large bowl of a stand mixer.

Combine milk, water and 1/4 cup of the butter in a saucepan and cook over medium heat until butter melts, stirring occasionally. Remove from heat and let mixture cool to 120 to 130 degrees F (49 to 54 degrees C).

Gradually add milk to flour mixture and beat at low speed of an electric mixer for 30 seconds. Then beat for 2 minutes at high speed. Gradually stir in the remaining flour to make a soft dough.

Replace the whisk attachment on your mixer with the dough hook and knead for about 5 minutes until dough is smooth and elastic. Place dough in a well greased bowl, turning to grease top. Cover and let rise in a warm place for about 1 hour and 15 minutes. Punch dough down, cover and let rest for 10 minutes.

Shape dough into 40 balls and dip each one in the melted butter. Place the balls in two greased 9 inch square baking pans. Cover and let rise for 45 minutes.

Bake in a preheated 375 F oven for 15 minutes or until rolls are golden. Brush warm rolls with any remaining melted butter.

The only departure I took from the instructions was in forming the rolls. After the first rise, I punched down the dough and began squeezing grape sized balls off of the big ball of dough. Each piece was rolled smooth between my palms and dipped into a bowl of melted butter. I put three small dough balls into each hollow of generously buttered muffin tins to form a cloverleaf roll. If you’ve ever had monkey bread, the cloverleaf roll is the same concept, a pull-apart loaf, on an unsweetened and miniature scale. 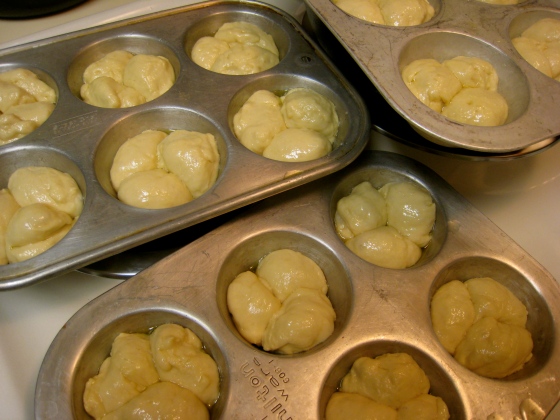 Since one of the most common problems that bakers have is incorrect oven thermostats, resulting in too low temperatures and under baked bread, I recently got one of those little low tech oven thermometers to get a more accurate read. My oven varies from between 15 and 25 degrees off! No wonder my loaves had been doughy! It’s really helpful to be able to adjust the oven to the correct temperature for almost any type of cooking but it’s pretty crucial for baking. You can pick one up for about $4 at most hardware stores.

So, rolls are rising and the oven is preheating to the correct temperature. Soup is on the stove and already the day seems a little less grim. It’s remarkable what good smells can do for a bleak mood.

Fifteen minutes before suppertime, I hopefully slide my muffin tins into the oven and hope for the best. Golden, buttery, and yeasty, they emerged to be immediately fallen upon like a pack of hungry wolves. We’re burning our fingers and tongues to get at them- they smell so good! They have that golden top and lightly crisp buttery outside while the interior pulls apart to a light and airy texture that yeast and gluten combine to make. Mmmm. Maybe I’ll actually be able to crack this baking thing.

I just discovered something that simultaneously gladdens and frustrates me. It frustrates me because it’s like discovering an amazing shortcut to work that shaves 15 minutes of stop and go traffic off the drive after you’ve been driving the same route for 5 years. Why didn’t I know this sooner? It gladdens me because I have discovered and easy way to make butter taste even better! Yes, butter. Taste. Even. Better.

It all started because artichokes are in season here and I have been taking advantage of their abundance and the fact that we can now both enjoy the labor-intensive ritual of dipping the petals into something delicious and scraping off the flesh between our teeth. I’ve been steaming them or steaming them first and then splitting and grilling the halves. I usually make a lemony mayonnaise, maybe something with capers or an aioli, but was in the mood for something simple and easy.  I had butter in the fridge (of course) and decided to try making clarified butter.

Clarified butter is butter from which the milk solids and water have been removed by boiling and straining or skimming it. Taking the process one step further and carefully browning the milk solids before separating them produces ghee or beurre noisette (brown butter). Clarified butter has a very high smoke point, perfect for frying or sautéing vegetables over high heat. But just like other foods whose flavor is enhanced by toasting or caramelizing, browned butter is butter intensified, the butteriest of butter flavors.

Grab a couple of sticks of butter (it keeps well, so go ahead and make a lot) and a heavy bottomed pan. This is really the only touchy part of this procedure- you really don’t want it to burn, so a heavy pan and a watchful eye will be important.

Melt the butter over medium heat.

It will foam up and steam- this is the water cooking out of the emulsion. The top will begin to be covered with foam as the milk solids then separate from the fat.

Give it a stir and see if there is a layer of white on the bottom as well.

When the white milk fats have separated from the yellow fat and the fat is transparent, take it off the heat and scoop the opaque top layer off, pour the clear layer into a clean jar or ramekin, leaving the white solids in the bottom. This is clarified butter. If you want to take it to the next level, leave everything to gently cook in the pan until the layer of solids on the bottom is golden brown and the butter starts to smell like popcorn. 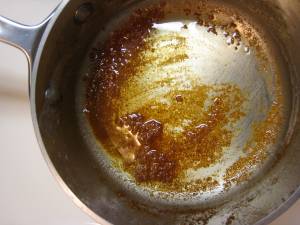 I can’t tell you how delicious this is. You really have to try it to understand why I’m so excited about how easy this liquid gold is to produce. Dip a spear of asparagus into it and you’ll see what I mean. Artichokes and beurre noisette are an unmitigated pleasure. It’s the little things, really, that make me the happiest. It’s ways of bringing out the best in the simple pleasures of life. And I mean, come on, it’s even better tasting butter.