I love those puffy crisp chile rellenos covered with their golden eggy batter, deep fried, filled with oozing cheese and served with a scoop of salsa. If a restaurant or cook can make that dish well, without being soggy or bland or greasy, they have my respect and admiration.

It wouldn’t be wise for me to indulge in that particular version of the chile relleno very often though. They’re a little too rich for everyday (or every week) consumption and they are time-consuming to make well. But “relleno” just means “filled” or “stuffed” in Spanish so I make my version with poblanos baked and filled with vegetables and just a little cheese. It’s satisfying without being too heavy and a lovely way to enjoy more peak summer corn and chiles.

The only fiddly thing about this recipe is charring the peppers to remove the skin. I’ve made a lot of stuffed peppers of all types over the years and I cannot make one that I like if I don’t start with a somewhat cooked pepper. The timing of cooking is always off somehow, the pepper is still crunchy when the filling is disintegrating or the filling gets watery from the liquid that the pepper releases while cooking. So bear with me and try charring the peppers at least once. 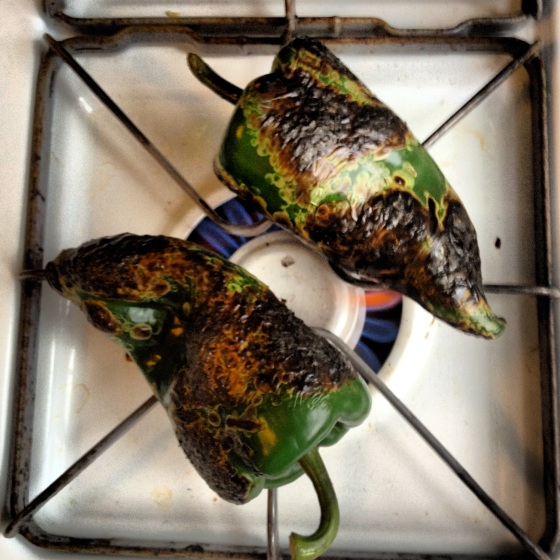 Dicing the vegetables into somewhat uniform pieces makes for a better bite; the combination of a fork-full of sweet peppers, creamy black beans, and the pop of sweet corn and salty cheese all at once is better than stabbing at lots of disparate chunks.

I also like to add a little cheese to the filling right before I stuff the peppers. It adds a little bit of tang and richness and the fat brings the flavors in the filling together. If you live somewhere that has good salty crumbly fresh Mexican Cheese available, use that, but I have used feta and fresh chèvre when I can’t find the Mexican cheese and the flavor works well.

Since cilantro can be such a polarizing flavor, I’ve omitted it from this recipe but if you like cilantro, stir some torn leaves in with the cheese.

The amounts in this recipe can be adjusted according to the size of the poblanos. Think of it more in terms of proportions rather than exact measurements.

3 ounces fresh cheese such as cotija, feta, or chèvre

First, char the poblanos, either on a grill, on the burner of a gas stove, or under a broiler. Turn to blacken the skin evenly. When the chiles are blistered all over, put them in a bowl with a plate to cover them to steam a little and cool down to the point they can be handled. Pick the blackened skin off the outside, although this is not the time for perfection, a little of the char left behind adds flavor.

Prepare the filling: dice the onion, peppers and tomato into pieces not too much larger than the beans and corn. This will help the ingredients cook evenly.

In a large skillet, heat a splash of oil to a shimmer. Add the onion and peppers and sauté for a couple of minutes over medium heat. Add the corn kernels and spices and raise the heat, stirring to let the corn caramelize a little. Lower the heat and gently stir in the tomatoes and beans. Once they have warmed, remove the pan from the heat and set aside. Stir in 3/4 or so of the cheese, trying to keep it in chunks.

Make a slit down the side of each poblano and scoop and rinse the seeds out. Place the, slit side up in a baking dish that just holds the peppers without a lot of room to spare. Spoon the vegetable filling into the poblanos, filling them generously and pouring any accumulated juices over the pan. Crumble the rest of the cheese over the top and bake for about 15 minutes.

Serve with rice and a drizzle of chipotle salsa roja (if you like).