When I knew that we would be living in a furnished temporary apartment for two months with a “fully equipped” kitchen, I suspected rightly that the kitchen would only be considered fully equipped by someone who ate in restaurants exclusively, with perhaps an occasional “home-cooked” bowl of cereal. I started a mental list of things I used most often and then pared that list down to the most easily transportable basics. Here is what I brought: 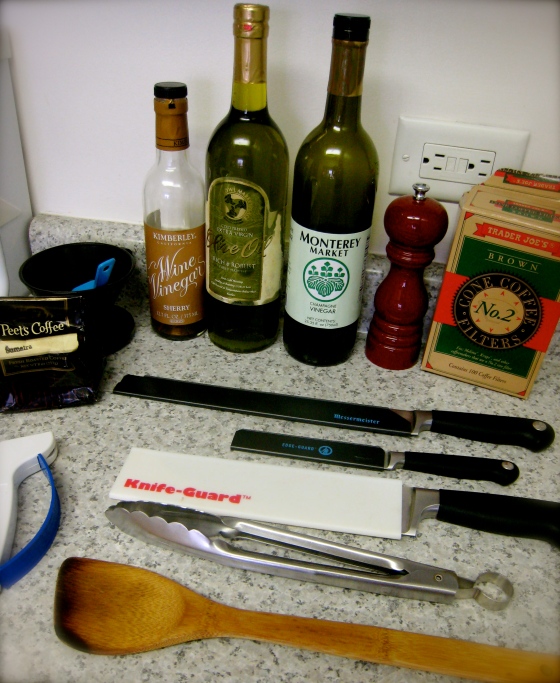 -tongs ( my second pair of hands)

-Sherry and Champagne vinegar and olive oil- these were last-minute additions because the packers didn’t think they would make it intact in the truck, but I’ve  used them a lot anyway, so I’m glad they came along with us.

Once we got to the apartment and my worst fears about the kitchen equipment were realized (this cookware is the reason “heavy-bottomed pots” are specified- I feel like I am cooking in big Coke cans), I started another mental list of things I wish I had brought:

-a flexible plastic cutting board as we’ve been provided a 3-legged glass cutting board (yes, I know that you don’t cut on glass)

-my saute’ pan, probably my most versatile and oft-used piece of cookware

-a small cheese grater- because believe me, you only grate an entire block of cheese with a fork once before thinking “that little cheese grater wouldn’t have taken up that much space in the car.”

-my jar of good paprika, because you can do a lot to meat, pork and chicken with salt, pepper, and paprika.

I tend to keep my kitchen tools pretty well-edited to things I actually use regularly; I’m not a big gadget collector. But it has been interesting to see that I can function reasonably well with a really basic handful of tools and what things I miss most when they are unavailable to me.

4 thoughts on “What I brought”