I expect I might get a few “she’s an idiot, bless her heart”s for this one. I’m sort of messing around with one of the quintessential elements of a regional cuisine; but I have my reasons.

Although I hail from Atlanta, Georgia, and although my Southern roots spread deep and wide, my childhood did not really establish me with the fundamentals that constitute the canon of “real Southern cooking”. We didn’t eat pork  (so no BBQ) or seafood, we didn’t fry anything, and we weren’t allowed to eat white sugar. I knew more about tofu, bean sprouts, and carob (which in my opinion is the devil’s sorry substitute for chocolate) than I did about catfish or country ham or peach ice cream.  Our biscuits usually had whole wheat in them, and our (freshly ground before our eyes at the health food store) peanut butter sandwiches on whole wheat bread were PB&”M” for molasses instead of “J” for jelly. 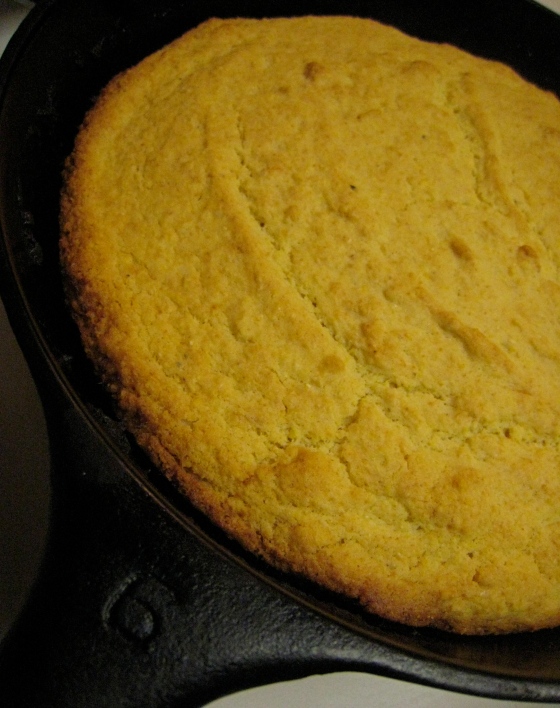 This lack of orthodoxy in my education has enabled me to come away without a dogmatic position on what constitutes “real Southern cornbread.”  I do prefer a crispier cornbread, made in a cast iron skillet, to the cakier moister versions I’ve tried. But I don’t like cornbread so gritty that it feels like a mouthful of sand crunching between my teeth. And while I don’t want it sweet, I don’t mind a little sugar in the mix. This sort of precluded most buttermilk-based recipes also, since they are subtly sour.

I tried the ATK Best Recipes version, probably a pretty classic Southern style cornbread that involves pouring boiling water over part of the cornmeal to make a mush before mixing it into the rest of the ingredients.  While it does enhance the corniness of the flavor, it left me wanting more. I’ve always used a little milk in cornbread; I thought about substituting milk for water in which case I could heat the cornmeal in the milk and which honestly, I’m not going to do, one of the chief benefits of a quick bread being its quickness.

There were a few dismal failures, not even worth mentioning in detail, but I did have the foresight to write “not good” in pencil next to the cornbread recipe in one cookbook to save myself the trouble next time.

My next good attempt was with the 1931 edition of The Joy of Cooking’s “Method I.” for cornbread.  The recipe itself has a pleasing symmetry – ¾ cup flour, ¾ cup cornmeal, and ¾ cup milk – that is helpful to the “number remembering deficients” among us (me).

It was still a little on the gritty side for me, so I modified it ever so slightly, using half cornmeal and half corn flour (very fine cornmeal, not cornstarch) to make up ¾ cup. The recipe also stipulates an 8×8 square pan, but I use a buttered and pre-heated cast iron skillet.

So, with minor adjustments, here is The Joy of Cooking‘s

Heat the oven to 425° Grease or butter a cast iron skillet. Five minutes before the batter is ready to bake, place the pan in the oven until it becomes sizzling hot.

In a separate bowl, beat together

Pour the liquid ingredients into the dry, mixing minimally. Pour the batter into the hot skillet and bake at 425° for about 25 minutes.